When deciding on a project, or maybe even designing one, there is always the question of whether to go the way of crochet or the neat of knitting.

Knitting and crochet can be combined to make the most beautiful items you can imagine. However the two crafts are quite different, and it goes further than simply saying that they both use the same yarn, but crochet uses one hook and knitting uses two needles.

In general, crocheting is faster

A crochet project typically takes about one-third of the time that the same knitting project will, given that the crochet/knitter is equally skilled in both. Obviously, if a person has more training at one than the other, or she is using tiny needles for one project and huge ones on another, her timings will deviate from this rough estimate. However, all in all, it is safe to say that crochet is faster, all things equal. Much of this is due to the fact that crochet projects tend to be much “airier,” and the holes left behind in the object cause faster growth. The crocheter does not have to deal with dropped stitches, either.

In other words, lots of lacy details. In a much more varied way than knitting does, especially for beginners. These are the designs that can stop people in their tracks to admire your work. While learning crochet, one learns many ideas from numerous great crocheters, and he will start to make their techniques his own. Individuals that hate patterns and have a desire to design find that crochet is much more amenable to that. It can certainly be done with the knitting, but it will take a bit more time.

Crochet is easier than knitting

This is debatable. The two crafts are simply too different to make that a fair statement. Crochet has many more different stitches to learn than knitting does, although knitting is very versatile when the knitter can throw in fancier things than a simple purl or knit. Crochet does use only one needle at a time, whereas knitting uses at least two at once. Crochet also allows a person to concentrate on one stitch at a time. 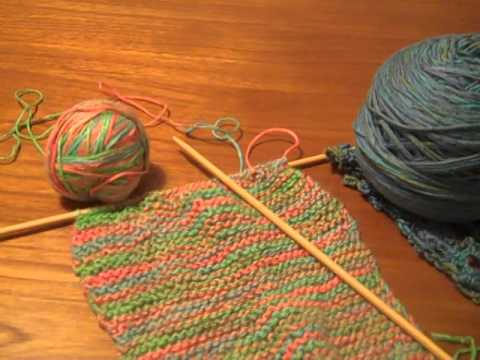 Knitting is wonderful in that once the “cast on” is mastered (not a very easy task in itself, but very do-able), the knitter needs only learn two stitches to get started on a simple project. Those two stitches are the knit and the purl. With just this basic knowledge, a simple project can be made, most likely something like a washcloth or a scarf. Knitted scarves can be elegantly gorgeous, especially if using a luscious yarn that does most of the work, and It is the best way to learn those two stitches by heart.

It’s true that it does use more yarn. For similar projects, a crochet project will use about 30 percent more yarn than a knit project.

Knitting allows for stretchy items to be made

It’s difficult to find a crocheted pair of socks that work out better than a knitted pair of socks. Knit sweaters simply wear better. But if making a cardigan, go with the crochet—it’s much boxier.

Knitting creates some absolutely beautiful lacework, and although some of those techniques are a bit harder to learn, it is worth it because somehow, knitted objects look so very elegant when they are finished. There is a certain something about the way knitting lays as opposed to crocheting.

Again, both crafts can be combined to get the better of the two worlds. For example, knit a beautiful scarf, and then add crochet lace to it. It’s possible to even add beads to both. The only limitation is the mind’s eye.